Mr. Vertigo by Paul Auster isn't, in my opinion, the greatest book; its first edition cover is great though. With jacket illustration by Art Spiegelman, Mr. Vertigo was first published by Viking Press in 1994. The book is about a young runaway named Walt who is propositioned by a mysterious man calling himself Master Yehudi, and promises Walt he can teach him how to levitate—which he eventually does. Walt and Master Yehudi tour the nation with their spectacle and various plot twists ensue. I'll be perfectly honest and say that I've never been able to get through finishing this book, for whatever reasons, but that still doesn't mean physically it's not great. Auster inscribed this copy to someone named Adam right after its publication, who in turn more than likely sold it. 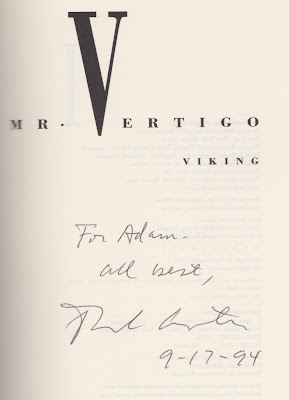