The Magic Barrel by Bernard Malamud


Bernard Malamud's collection of 13 short stories pictured above won the National Book Award in 1959, his first of two, and solidified his presence as a major emerging American writer. Writing largely about Judaism and its people, The Magic Barrel collects some of Malamud's finest short stories from the beginning of his writing career, some published as early as 1950. Malamud came to be considered a master of the short story, publicly praised by many of his colleagues, and now has a short story award named after him given out by the PEN foundation. The eponymous story from this collection is about a young rabbi named Leo Finkle about to begin his congregation, who is in search of a bride in order to get a bigger flock. Finkle sees a marriage coordinator, who gives him pictures of potential brides, except the one he likes most is the coordinator's daughter and comedy ensues. This later edition, which is virtually identical to the first edition, has amazing jacket design by Milton Glaser, the famous designer who made the I ♥ NY logo among many other things. Pictured below is Malamud's simple, script signature on the front endpaper. 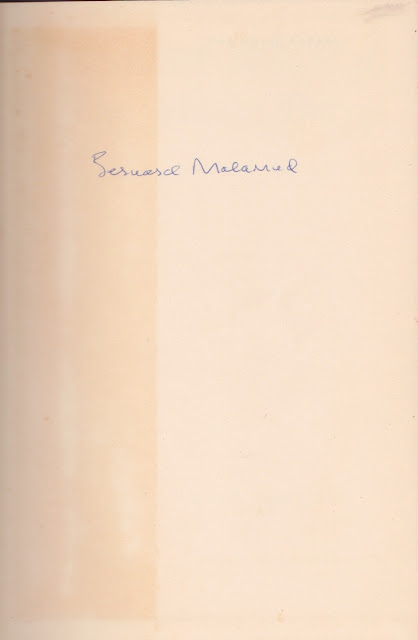